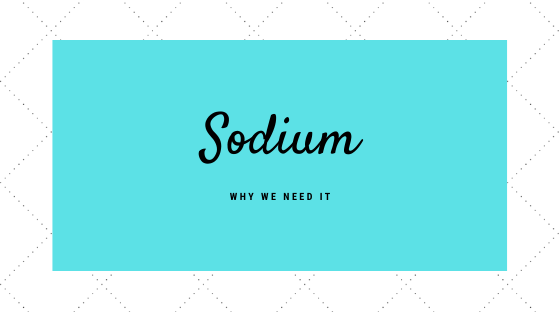 Sodium is probably the most controversial nutrient.  For decades it has been closely associated with table salt (sodium chloride) and used interchangeably in everyday conversations.  Often vilified, sodium is usually portrayed as harmful and bad for human health.   However, sodium is a necessary part of a balanced diet.  It is needed for survival, and in actuality makes up less than half of table salt’s composition.  Yet, people are still warned to stay away from dreaded sodium.

Sodium is both an electrolyte and a mineral.  Its main use is to send electrical signals from cells to regulate fluids throughout the body.  Roughly 85% of sodium is found in the blood and lymph fluids.   It helps balance water in the cells, and both nerves and muscles depend on sodium for proper function.  It is also used to transport nutrients and regulate blood volume.  Seeing how it is vital to many of the body’s functions, sodium intake should not be demonized so quickly.  In addition, it is almost impossible to take in large quantities of sodium from whole foods.  Bottom line: sodium is needed for the body to function properly, but consumption of massive amounts of table salt, as in manufactured food products may cause long term health issues.

Even though most people are mindful to not overdue sodium consumption, there are times when a sodium deficiency occurs, which can be lethal.

A sodium deficiency can be caused by:

How Much Should Be Consumed?

The US recommended daily amounts of sodium for adults is no more than 2,300 mg daily.  Remember, that everyone may need different daily amounts for optimal health.  More importantly, the majority of sodium in a Western diet comes from processed foods, not from whole foods.  As previously mentioned, sodium is an element in table salt which is used in massive amounts in many processed products.

Things to consider in order to determine if you are absorbing enough sodium in your diet include:

Ways to incorporate sodium sensibly into the diet: